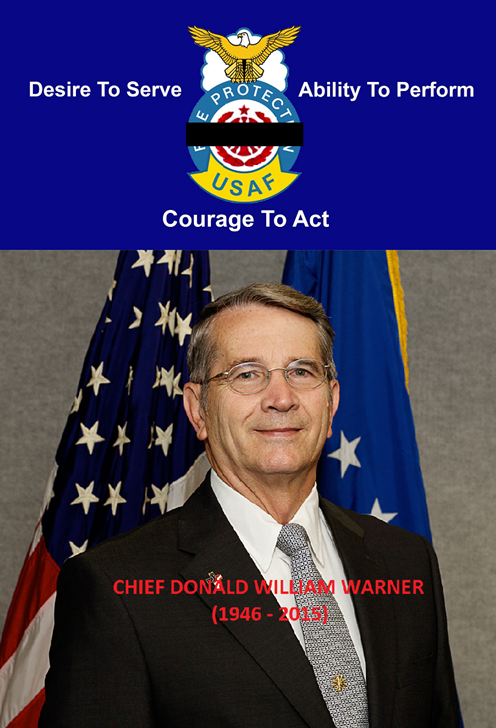 Dec. 22, 2015 -Donald William Warner, 69, of Panama City, went to be with the Lord Tuesday, December 22, 2015. Donald was born in Hazard, KY, and lived in Panama City for the last 14 years. He retired at Randolph AFB, San Antonio, TX, as a Chief Master Sergeant after 20 years of service in the US Air Force. After his military career, Donald joined Civil Service, retiring as Air Force Fire Chief at Tyndall AFB after 26 years of service. Donald successfully lobbied to have DOD Firefighters included at the Fallen Firefighter's Memorial in Emmitsburg, MD. He also developed a voluntary civilian leave program that allowed fellow firefighters to "take care of their own" by donating medical leave to those in need. Donald established the Air Force Fire Protection motto in 1980, "The Desire to Serve, Ability to Perform, and the Courage to Act". He also designed and founded a website to assist with hiring, training, and honoring DOD firefighters: DODFIRE.COM. Donald loved his grandbabies, was faithful to his church, The First Assembly of God, and honored his profession as a Firefighter. He will be greatly missed by all who knew him.

Funeral services will begin at 2:00 PM Saturday, December 26, 2015, at the First Assembly of God Church, 1701 N. East Avenue, with Pastor Phil Edwards officiating. Interment will follow at Forest Lawn Cemetery. The family will receive friends at the Church from 1:00 PM until service time at 2:00 PM.

In lieu of flowers, contributions in Donald's name may be made to the National Fallen Firefighters Association, S. Seaton Ave., Emmitsburg, MD 21727.

Any additional information or stories about Chief Warner can be sent to Admin@dodfire.com for inclusion on this page.